MOBILE - Hundreds of you took a day off from your jobs Wednesday to help out in the community. The United Way's 13th Day of Caring kicked off early Wednesday morning. A group of us from Fox Ten volunteered at Dumas Wesley Community Center along with some other groups. Lawson spent his day off, working. He's giving an old desk a new face. "What I'm doing now is stripping it down and then I'm going to stain it," he said. It looks like he knows what he's doing. "Looks can be deceiving," he said. Lawson is member of a group called Pacesetters Motorcycle Club. One of the many groups volunteering all around town. He's working at the Dumas Wesley Center. His group tackled the outside work.
Posted by PrimeTime at 10:12 PM No comments: 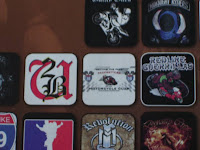 Pacesetters continues to Set The Pace made April 2007 issue of the Premier Custom Bike Magazines, our Logo made the Clubbin section of 2 Wheel Tuner.
Posted by PrimeTime at 10:06 PM No comments: